A few weeks ago, I was patting myself on the back for making an error screen in Sierra’s OPAC better. We clarified the reason a patron might see the error screen, and made it easy to get in touch with us to fix the error. What we found, it seems, is that this page shows up a lot. While we’d only seen one report of this page from a patron in a few years, in the past two weeks, we’ve had half a dozen or more. By giving folks an easy way to get in touch with us, we’re getting more reports.

To be honest, we don’t know why this error message is showing up. One thing we’ve noticed in a few of the situations where it appeared was that the patron had requested multiple items in a row, and the message showed up on the second request. One theory is that Sierra locks a patrons’ account while doing it’s database twiddly bits with the hold, and then unlocks it when it’s done. If the next request comes in while the account is locked, the error screen shows.

We’ve been unable to reproduce this error in our testing, but we took a step to reword the error message today so that folks won’t think their account is necessarily locked: 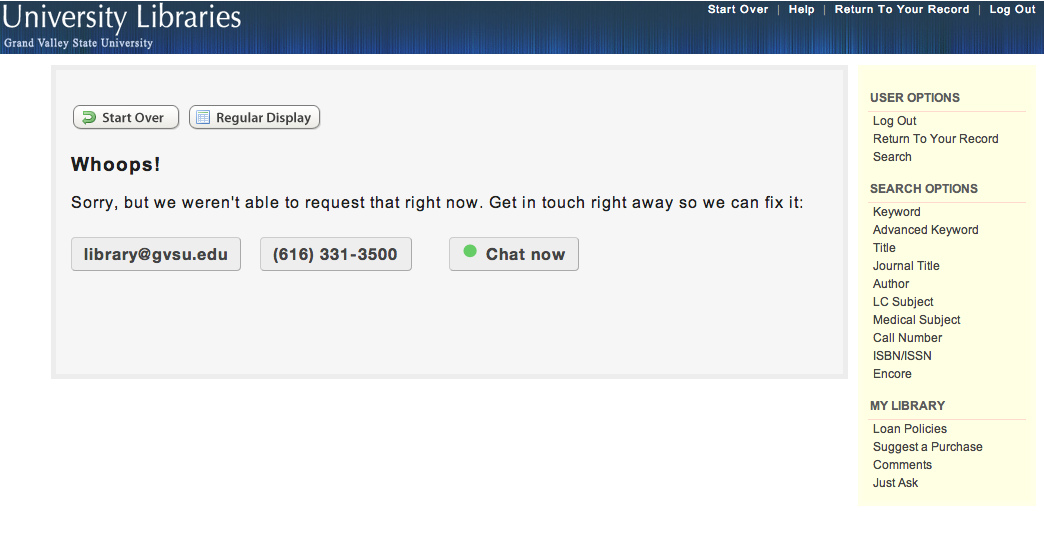 Patrick and I have also added some debugging code, so that we’ll be notified anytime this screen shows up with details of the request. Hopefully we’ll find a pattern soon!

Thanks to Katie Nedwick, Deb Maddox, and of course, the original problem reporter Max Eckard for keeping the data coming on this. You all deserve a free cup of coffee!

UPDATE: As of November 23rd, it appears this message shows up 2-3 times a day. We still haven’t been able to identify a common pattern.