I recorded my session in case you want to watch it (I’m working on a transcript). You can also find my slides on Speakerdeck, or listen to the talk on Huffduffer.

[Edit: I posted a transcript of the talk, if you prefer to read it.] 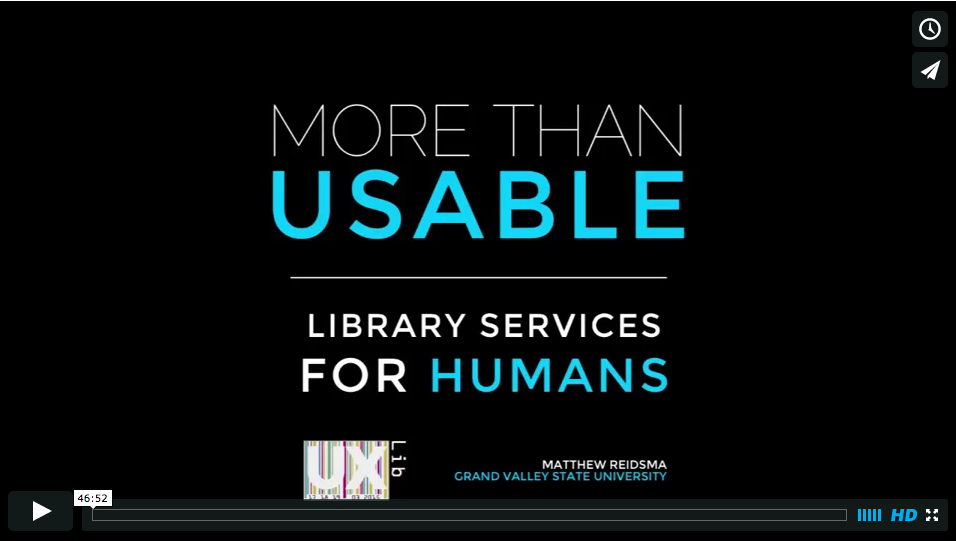 Watch the video on Vimeo

UX Lib was unlike any conference I’ve ever attended, and has been from the start. When I was asked to keynote, I was also put on the organizing committee (along with another of the keynoters, Paul-Jervis Heath). The idea was that we’d have a better understanding of the conference if we helped make it, and so we could create something bespoke for the event. I can say that I’ve never felt comfortable talking about phenomenology at a library conference before, but by working with the team that created and pulled off this unique event, I knew that this was my chance. (Not that I didn’t panic, even up until 15 minutes beforehand, that this talk would be a flop. I rewrote it five times in the weeks before the event.)

Thankfully, this wasn’t the case. Afterward, I received the highest compliment I’ve ever gotten for a talk: Andy Priestner, the committee chair, told me that he was so engrossed in what in was saying, that he kept forgetting to Tweet about it. (He’ll deny that, of course, but Ned Potter made the mistake of putting that in writing in the last paragraph here, so I’m satisfied.)

[Edit: Donna Lanclos later called it “the best damn keynote talk I’ve ever attended,” which made me blush and is crazy since she was at her own keynote a few days before.]

Of course, lots of folks did manage to tweet, and Ned Potter wrangled up a nice Storify of some representative tweets, and he did a very kind writeup of the talk on his blog. I was also fortunate that the fantasically talented conference photographer, Jamie Tilley, did an incredible job of photographing the talk (as he did for the whole conference). 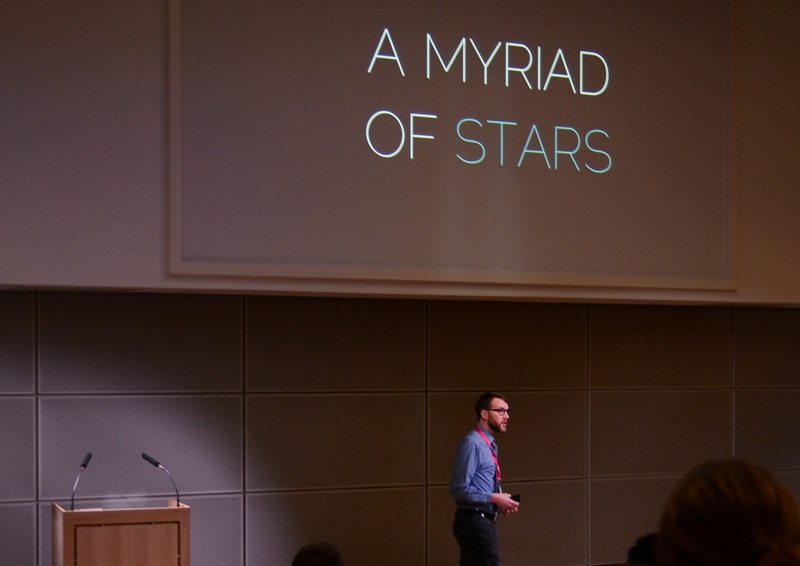 I spoke about the difference between designing for tasks and designing for experience, and how the latter often looks remarkably like the former, but with some added emphasis on the types of emotions that doing a task might cause. But life is bigger than that. Emotions aren’t just the by-product of doing things, and experience is more than just emotions and tasks. By exploring a few themes—the metaphors by which we understand technology, how phenomenology can help us learn about experience, how Heidegger saw our interactions with the world—I made the case for rethinking usability from the removal of problems to designing things that enable users to recover from the inevitable breakdowns that occur when things are used by people.

The conference was largely about immersing ourselves in UX—ethnographic research, ideation, prototyping, and selling our ideas. But one of the most amazing things that came out of UX Lib wasn’t part of the official conference at all; it was a Twitter account that sprang up during the conference that helped explain UX in terms of stories that most folks are already familiar with: the world of Harry Potter. Cambridge’s UX Lib was indeed a lot like @HogwartsUXLib, with the medieval buildings and grand halls and traditions. Sometimes it can be tough to talk about how UX plays out in our day-to-day work, but the genius behind @HogwartsUXLib manages to explain UX concepts like personas and ethnographic research by taking us out of our everyday and into something fantastic but familiar: the world of Hogwarts School for Witchcraft and Wizardry.

The account is so good at staying in character, and not just with clever things to tweet to the world. When my pal Matt Borg and I got lost in Cambridge walking between venue spots, the best help we got was from @HogwartsUXLibs: 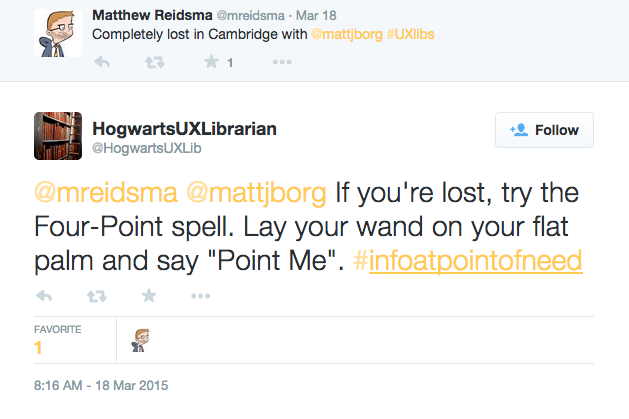 I’m still digesting the experience of being at, participating in, speaking at, and down-right living UX Lib for a week, so there will be more to say. If you’re interested in finding out more now, I have seen several wonderful write-ups for the conference. It was an experience that most of us who attended won’t soon forget. (In fact, I’ve seen nearly as much twitter traffic today, 4 days after the conference ended, than when the conference was in full swing.) Check out these roundups (more will be added as I see them):

(Have I missed a writeup? Let me know and I’ll add it here.)